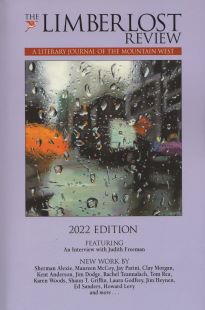 A Literary Journal of the Mountain West

Limberlost Press of Boise, Idaho, has released the 2022 edition of The Limberlost Review: A Literary Journal of the Mountain West, edited by Rick and Rosemary Ardinger. The 390-page literary annual features interviews, poetry, fiction, essays, artwork, and “re-readings” of favorite books by some of the best in the West and beyond.

The Limberlost Review began as an occasional literary magazine in the 1970s and 1980s that took a long hiatus while the editors devoted years to publishing individual volumes of poetry (mostly letterpress-printed editions) for several decades. In 2019, The Limberlost Review: A Literary Journal of the Mountain West was revived as a 300-page annual anthology.

“This is our fourth major edition since 2019, and it gets better each time,” says Edito/Publisher Rick Ardinger, former Director of the Idaho Humanities Council. “Work by contributors in every edition so far have been nominated for the Pushcart Prize, and we anticipate more nominations in the future. This is a literary journal for readers, not just writers, and the stunning artwork makes it all the more readable.”

An interview with Judith Freeman, whose fifth novel, MacArthur Park appeared this past spring from Pantheon.

Purchase The Limberlost Review directly online by simply adding it to your cart.
Or, if you prefer to pay by check, print our book order form and mail it with your check to the address above.
($3 shipping on all books)