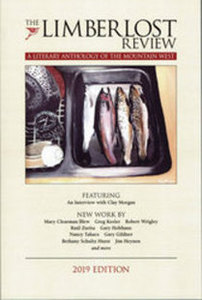 A Literary Anthology of the Mountain West

Limberlost Press announces publication of The Limberlost Review: A Literary Anthology of the Mountain West edited by Rick and Rosemary Ardinger. The new 280-page anthology revives a literary journal of the 1970s and 1980s and features poetry, fiction essays, artwork, translations, and other personal writing by some award-winning contributors.

Though the first issue of the Review appeared in 1976 as a literary magazine of the small press movement, Limberlost Press since the late-1980s has been producing in lieu of the Review hand-sewn, letterpress printed, limited editions of poetry by individual writers such as Jim Harrison, John Updike, Allen Ginsberg, Sherman Alexie, Lawrence Ferlinghetti, as well as such noteworthy poets from Idaho and the West as Bill Studebaker, Margaret Aho, Gino Sky, Judith Root, Chuck Guilford, Robert Wrigley, Kim Stafford, Nancy Takacs, and many others.

Rick Ardinger says that while Limberlost Press will continue to publish books by individual writers, it was time to revive The Limberlost Review as an occasional journal.

“The convener in us thinks it’s just time,” Ardinger writes in the Introduction. “Despite dramatic growth and proliferation of online literary journals throughout the world, there are fewer and fewer print venues for writers in the Mountain West, and we miss the creative stir that comes from creating the mix, and bringing together the work of writers and artists in a print journal that can be passed around, talked about, and read in the bathtub.”

This edition of the revived Review features contributions by more than three dozen writers and artists, including an interview with Idaho novelist Clay Morgan; translations by BSU’s Mac Test of a half-dozen poems by award-winning Chilean poet Raúl Zurita; a brief, reflective history of Limberlost Press, and a colorful montage of artwork, photos, and book covers promoting the works of many writers.

Listen to a KBSU interview with Rick Ardinger about Limberlost Review

Save $2 now and get it direct from Limberlost Press

Purchase The Limberlost Review directly online by simply adding it to your cart.
Or, if you prefer to pay by check, print our book order form and mail it with your check to the address above. ($3 shipping on all books)