GHOST in the Bloody Show 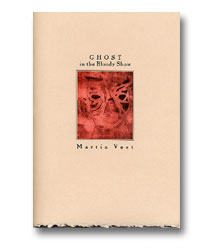 Ghost in the Bloody Show is a starkly honest and often startling collection of poems about surviving on the edge of poverty and society. Vest is a tough survivor who has endured the deaths of friends by suicide, the impulse of alcohol, relationships gone awry, and memories of other "outsider" writers, yet his poems explore the beautiful depths of those experiences with a lyric and poignant clarity.

Over the years, Vest has worked the odd jobs few people want to do, and he's managed a low rent existence that both inspires and enflames his literary work. For years at readings at Pocatello's Walrus and Carpenter Bookstore, he's stunned audiences with his stark and unembellished stories that weave into poetic lines. Two years ago, after hearing him read publicly a few times, Idaho State University Speech Instructors Leslie Leek and Steven Puglisi brought Vest's work to the attention of Limberlost Press editors Rick and Rosemary Ardinger.

Vest was raised in Idaho and Tennessee. He says his earliest memories are of his father, a Nashville songwriter, typing out songs at an old Underwood typewriter. Vest currently works for Pocatello's St. Vincent de Paul. His poems have appeared across the nation in such journals as The New York Quarterly, Slipstream, Rattle, The Chiron Review, and Pearl. He has received four Pushcart Prize nominations from various literary magazines.

Despite the attention he is receiving for his work, Vest says he likes obscurity and prefers to avoid talking too much about his work.

"I've always been fascinated by the idea of anonymity. People are always striving to become noticed, Vest says of his new book. "To actively pursue your own anonymity makes you either a saint, a criminal, or Sasquatch, Writers are a little bit of all three. Bob Dylan says, 'To live outside the law, you must be honest.' These poems are an attempt toward honesty."

A painting by his wife Anne graces the cover of his new book of poems.