Coyote in the Mountains

"The mundane settings of these stories become, in large part, their whole point. Coyote isn’t dead in the ‘Brave new World,’ not yet anyway, but the magic is leaking out quickly. Rember pulls off a neat trick here, in that the mythological archetypes of his characters (Coyote hangs out with folks like Bear, a high-powered Big City attorney, and Rabbit, a former flower child who now works for a major defense contractor) provide a deep counterpoint to to any convention of current minimalist fiction technique he may care to exploit . . . Coyote himself might have written this book." 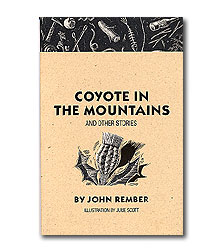 Coyote in the Mountains has earned a cult-like following since it first appeared in book form in 1989. We’ve heard about readers in places as far away as Nepal. Comprised of nine stories that read sequentially, the book reads like a novel, a fable of the New West, with Coyote drifting through the lives of domesticated characters in a resort community in the Northern Rockies. The book is beautifully accented with illustrations by artist Julie Scott.

John Rember is Writer-in-Residence at Albertson College of Idaho. He is the author of another collection of stories, Cheerleaders from Gommorha (Confluence Press, 1994). His stories and essays appear widely in magazines across the country. He has traveled internationally as well for several travel magazines. He is currently at work on a novel. He makes his home near where he was raised near the headwaters of the Salmon River not far from Stanley, Idaho.