Of Your Passage, O Summer

“Dear Rick Ardinger: In publishing John Haines’ Of Your Passage, O Summer, you have performed a very great service to the whole world of art and literature. His poems are beyond beautiful; they are important, uniquely valuable, and a destination for the hopes and ambitions of us all.” 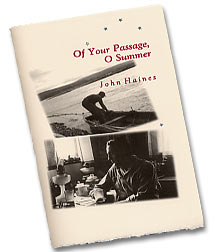 Of Your Passage, O Summer is a collection of poems from the late-1950s and early-1960s thought lost for decades, then recently found, and now published in honor of the poet’s 80th year. Haines, the poet laureate of Alaska, homesteaded in the wilderness 68 miles south of Fairbanks, working and living off the land. Written in relative isolation, they reflect news of the time—the Cuban missile crisis, confrontation with the Soviet Union, the threat of nuclear annihilation, the early stages of the Vietnam War. 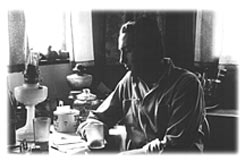 Influenced by his readings of classical Chinese poets, Haines’ poems quietly confront great questions about the very nature of existence, a plea for survival from a solitary survivor on a vast, beautiful, lonely and formidable landscape. Haines dedicates the book “to the time, the place, and the life lived—that which gave me the poems—and now to the reader of them.”

Of Your Passage, O Summer is letterpress printed on Mohawk Superfine paper, each copy sewn by hand into Rising Stonehenge wrappers in an edition of 500 copies. Fifty copies have been bound in cloth and boards and signed by the poet.

Purchase this book directly online by simply adding it to your cart. Or, if you prefer to pay by check, print our book order form and mail it with your International orders please include $8.50 shipping