Small Scenes is a collection of 20 short poems by Utah Poet Laureate and former Utah State University Professor Ken Brewer, inspired by 20 small woodcuts of the Utah landscape by noted Utah artist Royden Card. At the time Ken wrote the poems, the two had never met. Diagnosed with pancreatic cancer in the spring of 2005, Ken wanted to see Small Scenes in print more than any of his unpublished manuscripts, and Limberlost managed to complete this chapbook. Just weeks before Ken died, Royden and Ken finally met to hold this collaboration in their hands and to sign the Colophon pages for the signed/limited/hardcover edition. Ken died on March 15, 2006. Small Scenes is a quiet and beautiful sequence of poems and woodcuts, a poetic and artistic tribute to the landscapes of Utah, and a memorable collaborative work by two of Utah’s most gifted artists.

About the Poet & Artist: 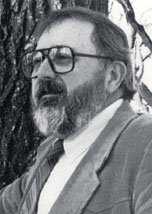 Ken Brewer was a fine poet and teacher of poetry, much loved by his students, colleagues, and friends throughout the Intermountain West. He taught at Utah State University in Logan for three decades before retiring to devote himself to more writing. He became Utah’s Poet Laureate in 2003, and in 2006 was honored by the Utah Humanities Council for Outstanding Achievement in the Humanities. He’s the author of several other limited editions, including The Place In Between (Limberlost Press, 1998), now out of print. His Sum of Accidents, selected poems, was published by City Art of Salt Lake City in 2003. He died at home on March 15, 2006.

Royden Card is a noted Utah painter and printmaker. He earned his MFA and later taught art at Brigham Young University for 16 years before devoting himself to his art full time a few years back. His paintings and printmaking explore personal relationships with close friends but most often depict landscapes of Utah and deserts of the West. His works are held in galleries and private collections across the country, including the Smithsonian Institution.